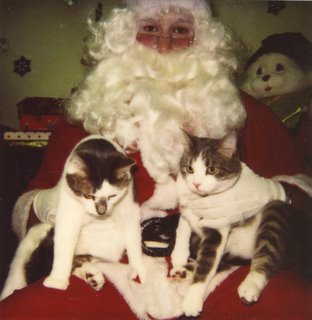 Wishing all our furry friends a very Merry Chirstmas! We hope Santa Paws was good to you!

Opus and Rosoce
Posted by Cat Naps in Italy at 6:44 PM 14 comments:

Opus and I raced to the ancient city wall of Pisa. We were so excited to be there and after hours on the train it felt good to stretch our legs. We ran as fast as could, a couple of times I almost tripped over my own paws. We reached the door at the same time although, I think I won by a nose!

Street vendors guarded the door to the Field of Miracles while at the same time harassing the tourist to buy their stuff. Apparently they recognised that Opus and I are high society cats, not one vendor tried to sell us a fake Rolex. They must have known that it is nothing but the best for these two cats! 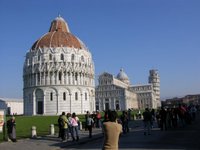 We walked through the thick door which opened up to the field of Miracles. The name was not a disappointment. Before our eyes was a incredibly large church made of white marble with a smaller matching baptistery resting just behind the church. The famous leaning bell tower stood at the front of the church welcoming visitors from around the world. A carpet of emerald green grass, the size of several football fields, cradled the three precious buildings. The stark white marble stood out against the ocean blue sky, not a cloud was in site.

We spent several hours touring the grand buildings. Around three o'clock we began to get hungry. On our way over to the leaning tower we noticed several groups of humans enjoying picnics on the lush grass. We put on our cute kitty faces and strutted over while our bellies growled. We approached a man and a women who were feeding the pigeons. We figured if they were nice enough to feed ugly birds that surly they would share a little food with a couple of cute cats. As we got closer, we were spotted by the pigeons. I tried to contain myself, but instinct gave way to rational thought. Before I knew it, I was running at full speed. I pounced, the birds made a mad dash to the sky and some how in all of the commotion the woman spilled her orange juice all over her white coat. 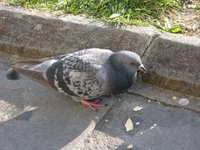 A rational person would have blamed the dirty birds for flying away in a tizzy. After all I wouldn't have hurt anyone, I was just playing. Honest! The woman began screaming at me in a strange language. It sounded like she was spitting while talking at the same time. Opus thinks she might have been speaking German. I didn't need to understand the words to know that I was in trouble. Opus and I ran away as quick as our little legs would carry us.

It wasn't long before we found more snacking humans. This time the pigeons kept their distance from us and I did a better job at controlling my instinct. My belly was rumbling by now and that look precedence over bird chasing.

The humans were kind and offered us a ham and cheese sandwhiches. We purred to let them know how happy they had made us. They pet us, played with us and even offered us wine to wash down the sandwiches. It was the perfect lunch.

After the eating, the playing and the wine drinking we decided it was time to take a little cat nap. We thanked the humans as we headed off in search of place to sleep. It wasn't long before we found a soft patch of grass in the sun. We snuggled up close together and slept in the warm rays of "il sole".

Opus woke up and was ready to go! I on the other hand still felt a little tipsy from the wine. The tower appeared to be leaning a little more then it had when we first got there.

We both agreed it would be best if I didn't try to climb up the crooked stairs. Opus would journey to the top alone while I waited below to take his picture. After Opus entered the leaning tower, I curled back up in the grass to wait. The sun felt so good on my face that I couldn't help but to close my eyes....just for a second. 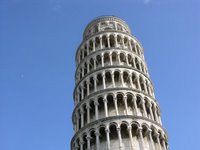 I awoke to the sound of the bells clamoring high above my head. It was Opus swinging on the ropes. Apparently he had been calling my name for fifteen minutes. When he failed to awake me he simply jumped on the ropes. I was afraid that we would get into trouble, but the crowd loved the show. Everyone clapped as Opus hopped off of the bells. I took a quick picture of him and then waited while he walked back down the stairs.

As the sun began to set we decided it was time to head home. It had been a wonderful day in Pisa, but we were tired and it was getting cold.

Two bus rides and a train trip later, we arrived safe and sound in our little town. We sneaked back into the house only find it empty. Our humans were still gone and we had gotten away with another adventure.

That night as I slept in front the radiator, I dreamed that we were back in Pisa. This time Opus and I were giant cats towering above the humans. Opus stood on his hind legs to check out the flapping flag waving on top of the leaning tower. I searched the grass for a soft spot to nap! The silly humans didn't even notice us as they posed for their pictures! 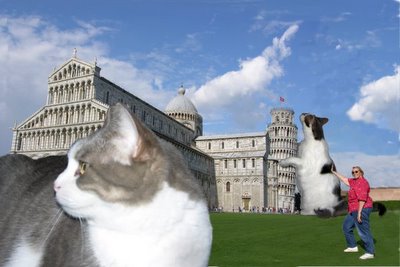 I can not believe it has been a month already since our last adventure. It has been a busy time in our home, but now things are settled again and we can write about our visit to Pisa.

At the end of October, found out that our humans were going out of town for a long weekend. We decided that this would be the perfect opportunity to take a little trip of our own. Afraid of getting caught again, I sent Roscoe on a mission. He was to find out WHERE our humans were going so that we could avoid their destination at all cost. Roscoe is a brave and sneaky cat. He crept quietly into the computer room and spied on our female human. He noticed that she was checking out hotels at Lake Como on the internet. They would be leaving on a Saturday and not returning home until Monday night! 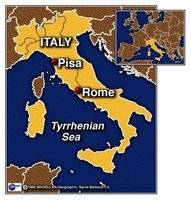 That night while the humans slept, we unfolded our large map of Italy. We decided we would throw our toy mouse in the air. Where ever it landed on the map, would be our destination.

"One..two...three" we tossed the mouse into the air. I watched it tumbling to the ground head over tail. Oh how I wished it could have been a real mouse to play with. It landed with a small thud. Right on top of the city of Pisa!

The morning, shortly after our humans left, we scurried out the door. We waited for the bus to come and take us to the train station. How lucky for us when the bus doors opened and there was our old friend, Mr. Statezitti, sitting behind the wheel. We don't know what his real name is, but he is always saying to us ***"State zitti", so that is what we call him.

Mr. Statezitti delivered us to the train station and wished us a "Buon viaggo". We look around for our friend who works at the train station. He was no where to be found, no tuna fish sandwiches for us today. Thankfully Roscoe thought to pack a bag of cat treats. We munched them on the train and hoped that the humans wouldn't notice that they were gone.

With the sun shining through our window and cat treats in our bellies, we snuggled down for a little cat nap. A short while later I awoke to a woman speaking Italian on the loud speakers. The only word I understood was Pisa.

"Roscoe, wake up! We are here!" I said. I swear, that cat can sleep through anything.

We walked out of the train station, hopped across the street and waited at the bus stop. I had read enough guide books to know that I didn't want to walk all the way to the "Field of Miracles". The first bus that stopped was driven by a cranky young man. "No gatto!" he yelled at us. We put on our best sad cat faces, but our cuteness was of no use. "No gatto!" he yelled a second time and then slammed the doors shut.

Just when I thought that we were going to have to walk (too much exercise for a cat) a second bus pulled up. This time a sweet older woman with gray hair was behind the wheel. She greeted us with a warm smile and we walked on board. She never said a word, but softly scratched our ears as we passed by.

We drove for a short while when Roscoe spotted it out of his window. Behind the ancient city wall was the Field of Miracles. We could see the top of the tower peaking out above the wall. As soon as the doors opened we ran out of the bus, remembering to thank the kind lady on our way out.

As we ran towards the accient city door, the bells of the leaning tower began to ring as if welcoming us to Pisa and the Field of Miracles.

End of Part One