Dear Friends,
I know we have been absent for a while now. In 2009, I returned to school and found most of time was being taken up by the classes I was attending. I think a part of me had also come to realize that my passion for blogging had faded. There were also some big changes that happened in our lives, changes I was not ready to write about.

Yesterday morning an earthquake hit not far from where we once lived. Some of our friends have already been asking if Ollie and I are okay. So, I thought now might be a good time to write a quick note on our blog to let everyone know that Ollie and I are doing just fine.

This past summer Opus, Olive, and I returned to the States. Our time in Italy had come to a sad and unexpected end. I flew back in June, first with Opus. He was able to fly in his soft cage under my feet. But the people I was sitting with didn't mind that I put his cage on my tray table (he wasn't allowed outside of the cage). He was able to see better from there and get a bit of air. In July, I returned to Italy for the last of my things and for Olive (you can only fly with one pet in-cabin at a time). Ollie was a bit more vocal about the journey home, but after an incredibly long (and messy) trip, we landed in Indiana. The cats both quickly adjusted to their new home, loving the central air conditioning we never had in Italy. Our home is filled with large windows that offer up enormous pools of sunlight, which both cats enjoyed immensely.

Opus lived with us in our new home for nearly five months. We look around now and can see memories of him in every corner. Olive has adjusted nicely. When Opus was here, she often stayed alone in another room, but since his departure Olive has turned into my girl. I can see now that she was just a passive cat who always let Opus have the lime light, but now that he is gone she is taking her turn to shine. I thought I might have to get another cat to keep her company, but she seems happy to not have the competition.

Though we no longer blog, we think often of all the friends we have met over the years because of Cat Naps in Italy. Thanks for stopping by now and again and checking in on us.You will never be forgotten and will always hold a special place in our hearts. 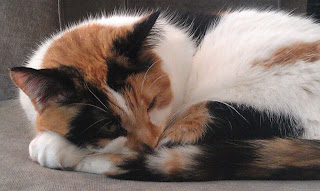 And who knows, maybe one day there will be Cat Naps in Indiana? Until then friends....
Posted by Cat Naps in Italy at 5:42 PM 44 comments: