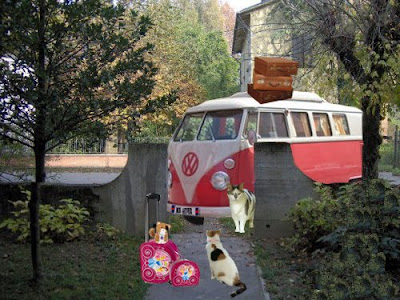 Olive and myself are heading to the good old USA for a visit with Sassy. You see our human has dumped us, again, so we decided to take advantage of our alone time. Olive has been wanting to visit with Sassy and visit Little Productions. This was the perfect time so off we go.

Will See You Again Charlie


Charlie, a sweet friend, has gone to the bridge. Forever she will be free to run and play. Forever young and with those that knew her from before. You will certainly be missed.
Posted by Cat Naps in Italy at 5:45 PM 6 comments:

The After the After Party

I am so happy that I was invited to Karl's party. It was my first EVER party and was soooo excited!

(photo by Sassy)
The party at Karl's house went on long into the night. I tell you, those new friends of mine sure are a bunch of party animals! I think I am going to fit in just fine!

Miss Sassy told that me that just isn't a party until someone ends up with a lamp shade on their head! Well, I am happy to report that SOMEONE ended up wearing a lampshade! The fur was flying as we hit the dance floor and parited into the wee hours of the morning.

Needless to say, all good things must come to an end...... 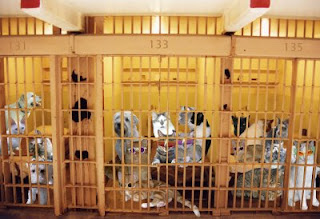 I can't WAIT till the next party! In the meantime, we have a bit of mess to clean up. 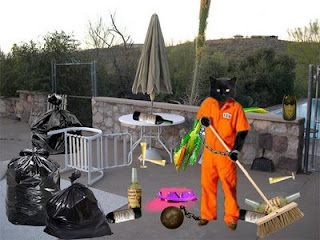 Let Me Introduce Myself.... 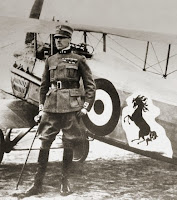 My new humans have a habit of naming cats after cartoon (or tv) characters OR great aviators.

Years before any of us lived here the male human started taking care of a feral cat who he named Baracca, after a famous, Italian WW1 fighter pilot who happened to be from the town just next to ours. You could say he was the Red Barron of Italy. Well, last year a grouchy reddish cat showed up at our house, in desperate need of a good meal. He is a skittish thing who still won't let ANYONE get close enough to touch him. Once it became clear that the vagabond was going to continue showing up at our house for three squares a day, the humans decided that they had to name him. Since they already had one feral cat named after a WW1 fighter pilot (and the fact that he was red) the Red Barron became the obvious choice. So that is how he came to be known as Manfred Von Richtofen, but he is lovingly called Manny for short.

Years before either of these cats even existed, Opus was named after the fat little penguin from the County Bloom comic strip. Of course he will tell you that he was named Opus because that is the Latin word for "great work". Shhhhh, don't tell him I told you the truth!

So when it came to naming me, the humans had two choices: name me after a comic strip like Opus or name me after a great pilot like the feral cats were. The first thing that came to the female human's mind was Amelia after Amelia Earhart, a pioneer in aviation. The male countered with the name Olive after Olive Oyl from the Popeye comic strip.

Everything thought the name Olive suited me as my eyes are olive colored AND I was about to move to a country that is famous for its top notch olive oil. PLUS there was a woman named Olive Beech who made some big contributions to aviation (she was one of the founders of the Beech Aircraft Company. It seemed like the perfect name!

HOWEVER, once I got home the male human started having second thoughts. I was nervous my first week with my new brother and took to growling and hissing any time he got too close. (Hey give me break, it was a long journey to get here and I was under a lot of stress). The male human started saying that I was a little witch which made him think of a character from the Scrooge McDuck comic strip. She was a witch from Naples who wanted to steal Scrooge McDuck's first magic dime. Her wish was to throw it into Mt. Vesuvius to release its magic so that she could use it. In the Italian version of the comic strip the witch, who was called Magica De Spell in the English version, was called none other than Amelia!

At the end of the day, no one could pick which name to use because they liked both names equally and that is why they have decided to use BOTH names. 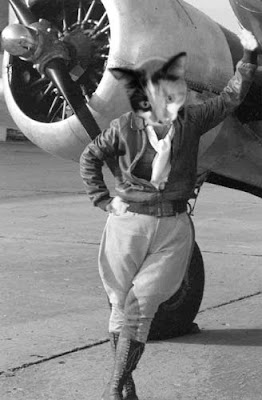 I am officially known as Olive Amelia Patches (Patches was my original name)! But my friends can call me Ollie! It is a big name to live up to, but I will do my best!
Thank you to everyone who voted for my name! I look forward to getting to know each and every one of you!

PS. Don't tell Opus that I hijacked the blog. I thought it needed a little bit of girl's touch!
Posted by Cat Naps in Italy at 5:39 PM 19 comments:

By the cat formally known as Patches
I haven't been here too long, but already I have been invited to party! Today is the Cat Realm's 2nd Blogoversary! I am so excited as this is my VERY FIRST trip in Opus's magic flying van! This will also give me an opportunity to meet many of Opus and Roscoe's dear friends. I feel like the luckiest cat in the world! 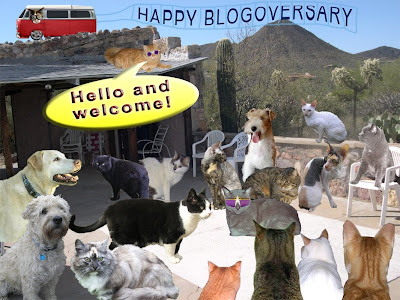 PS. If you haven't already done so, please vote for name at the top right side of our blog. The humans need to pick a name for me! Thanks!
Posted by Cat Naps in Italy at 12:48 PM 2 comments:

As many of you know, my human dumped me when she went back to America to visit her famiy for six weeks! She must have felt guilty about leaving me at home without the MFV or the computer because she brought me back this beautifully wrapped gift. 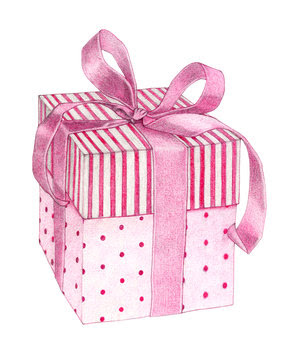 I couldn't imagine what was inside! And I couldn't help but think of Roscoe when I saw the box was wrapped with pink paper (he would have loved it)! I tore into it at once with pink ribbon flying everywhere! 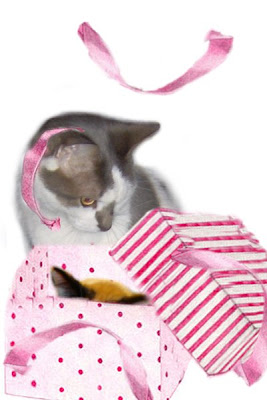 And do you what I found inside staring at me????? 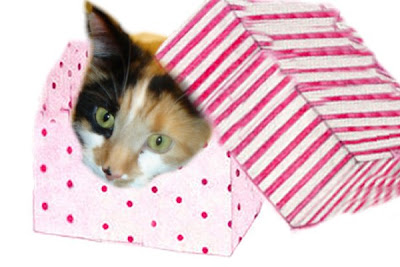 A new cat! While the human was in the States, she met and fell in love with a tiny, little female, calico cat that she found at the local animal shelter. The poor thing had been living there for three weeks when my human found her! She is a tiny thing, half the size of me, and is seven years old. 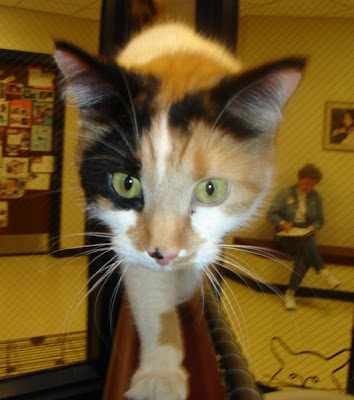 So I would like to introduce you to my little sister "the-cat-formally-known-as-Patches". The humans didn't really care for her name and, since she doesn't seem to know it anyway, have decided to rename her. The two wining choices are "Amelia" pronounced "Ah-meh-lee-ah" in Italian OR Olive (the color of her eyes).

The Human Is Back

Back in February the human decided to head on over the States to visit with family and friends. I didn't mind being dumped for six weeks, what I DID mind was that she took my magic flying van thus sticking me at home without transportation OR a computer! 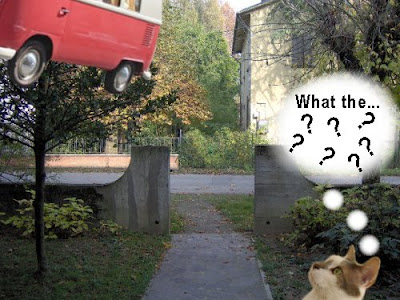 At last she returned on Friday with a great, big gift from America just for me. Clearly a shameless effort to erase any guilt she might have for stealing my wheels and dumping me. 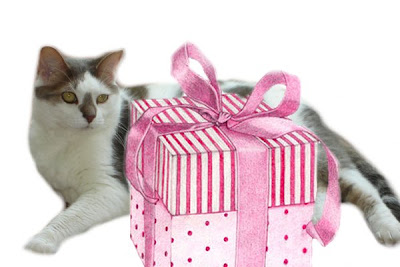 Any ideas of what might be inside?
Posted by Cat Naps in Italy at 5:21 PM 10 comments: 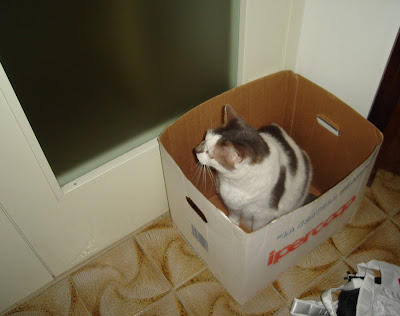 Most of you woke up today with the news reports about the two earthquakes that hit Italy during our night. The first hit near the city of Ravenna, which is only 20 minutes away from where we live. It was a 4.6! Because it was so deep in the earth, people felt the shaking as far as the next region! Did my humans notice the house shaking? Of course not! They were fast asleep with the TV on and hear (and felt) NOTHING! Good thing I was on watch to alert them had things gotten worse. Fortunately no one was hurt in the first earthquake.

The second earthquake was farther south in Abruzzo. That one was a 5.8! Many people have lost their lives and many more are without homes. Our government has called it a state of emergency! We all wish there was something we could to do help. But the most we can do at this point is to keep all of those people and their pets in our thoughts and prayers. My heart goes out to all that have lost their homes and worse than that their lives. Pray that their families will get through this most difficult time and no more quakes will follow.
Posted by Cat Naps in Italy at 1:23 AM 22 comments: