We really like living in Italy, they sure do know how to treat a cat around here! How many other countries have a "Day of the Cat"?

Even though it is an Italian holiday, we think our feline friends should celebrate no matter where in the world they live.

We are cats and they are lucky to have US!

The Colts Win the Super Bowl

Roscoe and I have spent the entire week celebrating! Can you believe that our hometown, Indianapolis, WON the Super Bowl?????

Thanks to all of our friends who were able to come to our Super Bowl party. We hope you had as much fun as we did! Our humans think it is time to put the blue wigs away, but we think we should keep them on for AT LEAST one more week. 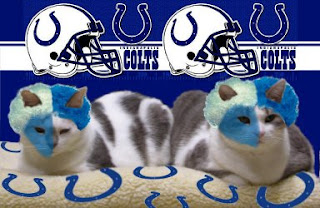 The Animals are Taking Over the Party!

Our humans are having a Virtual Super Bowl Party and they said that we could invite all of our friends. Send your picture to americanmedusa@yahoo.com to sign up. The game is on Sunday and we would love see you guys after being gone for so long. We don't really know what all the fuss is about. The female is happy because her hometown made it to the game this year (the Indianapolis Colts). We would be more excited if the team was called the Indianapolis Felines! 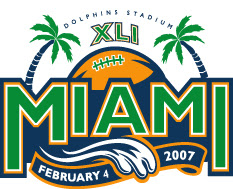 Be sure to join us and make you sure you state which team you are cheering on! See you at the game! 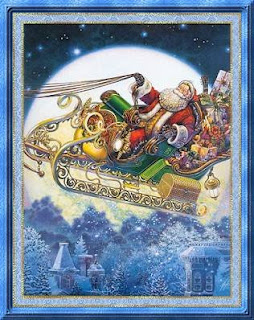 We know most of you think that we are just a couple of lazy cats because we neglect our blog so often. Normally you wouldn't be wrong, after all we ARE cats. We have a good excuse this time, we have been out of town again. Just after sending out our Christmas greetings, we ran into Santa. He was in our town square with eight tiny reindeer who were exhausted from being over worked on Christmas Eve. It was a sad sight: each reindeer was sprawled across the pavement with their legs pointing in each direction, bellies on the ground, heads down, tongues hanging out their mouths. Poor Rudolph's nose wouldn't even light up anymore. You get the picture, they were really exhausted.

The good news was that the crew had hung in there right until the end. All the presents were delivered to the good little children all over the world. It was on their return home that the boys ran out of gas. That is when they made a crash landing and came tumbling down right into the center of our town square.

Santa looked like he was about to start crying. He was tired and just wanted to get home. Opus and I knew we had to help, but what could we do? We are just a pair of regular American cats. Well, we offered the reindeer's some fresh carrots and water. We brought Santa a hot plate of pasta a glass of red wine. Everyone enjoyed the "refill" but it still wasn't enough to get the reindeer back their feet.

"If only there was something else we could do to help", Opus said. Santa's eyes lit up and that old sparkle returned at once. "Actually," he said with a hint of hope in his voice" there is something you could do, but it would be a lot hard of work". Well, how could we refuse? I mean, come on guys, it was SANTA!

So the reindeer, all eight of them, piled into the sleigh. You should have seen it, they looked like a stack cheerleaders trying to make a pyramid. Santa placed the sleigh belts around our bellies and tightened them tight. I was starting to worry that he was expecting us to drag them all the way back to the North Pole, when he took a small velvet sack out of his pocket. He reach inside and pulled out a handful of glitter and sprinkled it across my brother and I. It wasn't just any old glitter, it was magic glitter! The next thing we knew, we started to lift right off of the ground!

I got scared when our town grew small beneath our feet, but not Opus. He was saying "look over there Roscoe" and "look down there Roscoe". Once I relaxed it started to become fun. We flew over Italy with medieval castles looking like miniature home beneath us. It was a lot of hard work, but a lot of fun.

Once we got Santa and the crew safety back to the North Pole, we couldn't just leave. So we spent the last month hanging out with Santa. We drank eggnog every day and played with the elves. Of course our humans knew where we were. 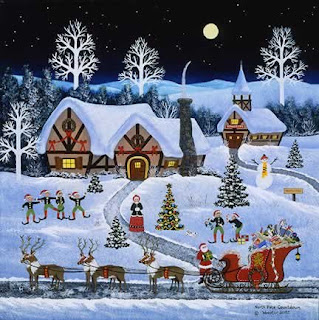 It was so much, but soon we began to miss the pasta in Italy, our soft beds in front the radiator but mostly we missed our humans. So a few days ago we asked the man in red to give us a lift back home.

Before Santa left, he asked if Opus and I would like be honorary reindeer and to work for him next Christmas. We thanked him for the offer, but explained that we are cats and that it would just be too much work. We told him that we would rather just curl up somewhere warm and let the reindeers do the work!