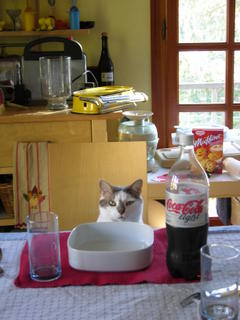 I think I speak on behalf of all cats and dogs when I say that we are sick and tired of eating on the floor. My Grandma hand painted us a beautiful bowl, but we want to sit at the table. We are NOT second class citizens!


Demand action fellow four legged friends! Refuse to eat on the floor! If we stick together, we can make this dream of eating at a table a reality! ACT NOW!

Join our campaign "Paws at the Table". Together we can dine with dignity!

This weekend was great! The humans decided to take off for the day. We were home alone for about an hour when Opus had a wonderful idea. He thought it would be fun to go on a road trip. Why should the humans have all of the fun?

We sneaked out of the house and walked to the bus station. We rode the bus to the train station and the stowed away in an empty compartment. We were so happy that we didn't get caught because we didn't have a ticket. We tried to buy one, but the silly guy at the ticket counter couldn't understand us. He thought we were begging for food and kept trying to feed us part of his tuna fish sandwich (they call sandwiches "pannini" in Italy). Not being cats to pass on free food, we accepted the tuna fish and walked away full (but without tickets).

We made it to Milan safe and sound! Opus wanted to go to Milan because he has always wanted to see Da Vinci's The Last Supper. I wanted to go Milan to do some shopping. It IS the fashion capital of Italy, you know.

We arrived in the main square around 2pm. The sky was gray and threatened to rain. We hadn't thought to grab our rubber cat boots and prayed that the rain would stay away. We didn't want our little toes to get wet.

You would not have believed the pigeons in this square! We thought it would be fun to chase some (and maybe to do a little hunting), but we were clearly out numbered! These birds weren't anything like the pigeons in America. They were HUGE. They were also ugly and looked a bit sickly. We decided not to tease the birds and just played it cool. We acted like we didn't even see them. We left the birds alone and the birds left us alone (thank God).

We hadn't been in the square an hour when the unthinkable happened. We ran into our humans! Of all the dumb luck! It turns out that they had gone to Milan for the day too! We got yelled at a little (I think because they were worried about us being there alone). 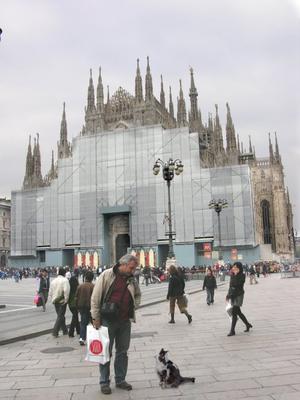 The good news is we did NOT get a spanking. The took us to see the galleria and then the four of us headed home in the car. 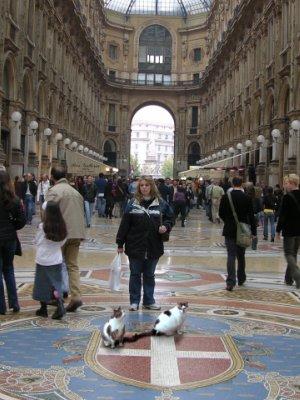 It was an exciting day, but we were sooooooo tired when we got home. We spent the rest of the weekend sleeping. Traveling takes a lot out of a cat.

Our humans told us NEVER to go out alone like that again. But now Opus and I have the travel bug. Rome, Florence, Pisa, Venice......how can a cat be expected to stay home? 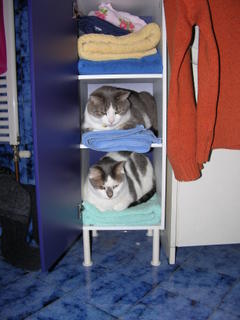 Check out our bunk beds! Isn't it great? We have always wanted our own set of bunckbeds, but the humans can't seem to understand us when we ask them for a set. One afternoon they left the door to the bathroom cabinet open and "Tah dah"! Bunk beds!

A dog would have never thought of this (no offense)!

Why does Roscoe always get the top?

Autumn is upon us. With the changing of the leaves, from hunter green to vibrant red, lemon yellow or burnt orange, comes the cold fall wind. In America the house was a bit warmer. Now we live in a house built of stone and tile. Believe me, when the weather turns cold outside, it gets cold inside.

Our humans were kind of enough to place kitty beds in front of the radiators. On the coldest of days, you will find us curled up to the radiator or snuggled underneath the down filled blanket.

So how does a cat warm his paws up after trotting across cold tile floors? By laying on his back with his hind feet up against the warm radiator! 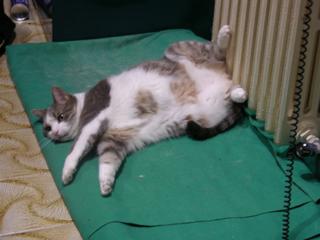 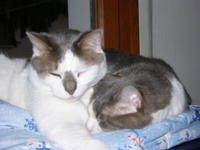 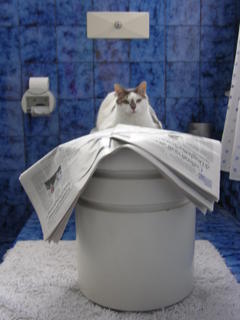 Forgive me, I must complain for just a moment. I tell you, living with a human can be a little trying at times. Just the other day I was in the "library" catching up on some reading when my human burst through the bathroom door. She took one look at me and ran out only to return with a camera. Can you imagine the humiliation?

Sure she feeds me and gives me a warm, safe place to sleep but that does NOT excuse her animal like behavior. If she doesn't change her bad behavior soon we will have to have a talk!

It isn't easy being a cat some days!