Though we don't get the NFL on TV here in Italy, our good friend Derby has been keeping us a foot, er a paw, as to how our beloved Indianapolis Colts are doing. Last year was a bitter sweet year for us when the Colts won the Super Duper Bowl; sweet because they won but bitter because we no longer live in Indy and couldn't join in on the celebration.

This year according our official NFL reporter, Derby, the Colts are at it again. It seems they are just a few games away from playing in the Super Duper Bowl! Sassy sent us an email saying that the Colts have a BIG game today. If they win today, they will go on to play for a spot in the Big Game! 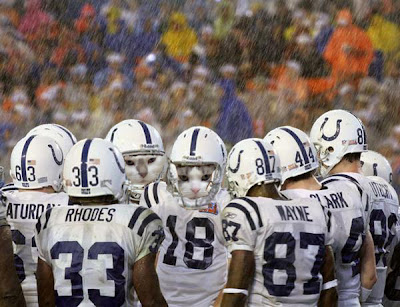 Last year we dressed up as excited fans, but this year we want in on the action! Look out grid iron, HERE WE COME! 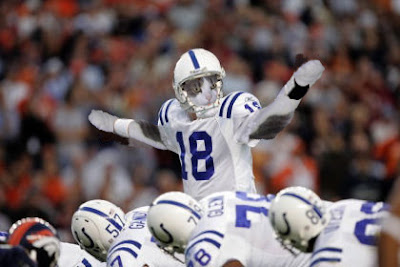 Photo by Sassy
Posted by Cat Naps in Italy at 3:18 PM

You guys are hilarious!!! What fun - we had NO idea - you play football - Sassy is a cheerleader - life is full of surprises! We are not into sport at all - but your pictures sure are funny!

Woohoo! Sassy's cheerleading for them and you two are playing with them. What an exciting game this is going to be. And we're not even football fans.

Perhaps we will root for them seeing the Hawks went down yesterday...

Great pics of you guys, very macho!
Just heard the news - sorry the Colts went down but it was a great effort by the kitty players.

Oh guys, I don't have good news for you on the Colts. They losted to the Chargers today. Mum, Grampie and I watched the game and we were all pulling for the Colts to win.

But we need your help. The Packers are still playing! You have to support the Packers now!

Hey, you guys were great and Sassy was terrific. Sorry you couldn't save the game.

Stoppin by to make ya two aren't hurt. I think after cheering on the football game and watching those crazies tackle each other ya might be safer back in Spain fightin the bulls. Wow, that football doesn't make sense to me. Anyway I am sorry for your loss, 24-28, but at least ya are done for the year and won't have to get beat up on by another football team. Ya did a good job. Ya guyg are the greatest!

Mao is home, isn't that great!!!!! I wish all of the little lost ones could get back home. Stop on over tomorrow afternoon to see what else I am up to.

No NFL in Italy? You must move immediately. I order you to cease and desist not-having-NFL. If you wish to keep up with the Super Bowl happenings, you can visit me online. I believe I am the ONLY cat in the world who will be live blogging the Super Bowl. I am sorry for your Colts, as I am for my Packers.