Since our post about our missing magic, flying van, the calls have been flooding in.

Our first call came from KC from The Catblogosphere who had this to report:

"There wuz a reeport yesserday here in Houston yesterday that a Magical Flying Van was spotted doing a fly-by at Ellington Field (near NASA-JSC). It turned out to be an astronaut trainee (we finks)."

Next to spot our van was the crew at Jan's Funny Farm. They saw it flying over the Flint River, down in Georgia, and managed to snap a photo of it.

The next sighting was reported by Asta, in New York City, who saw our van on a barge in the Hudson River. She tried to get the thieves to stop, but they ignored her cries. 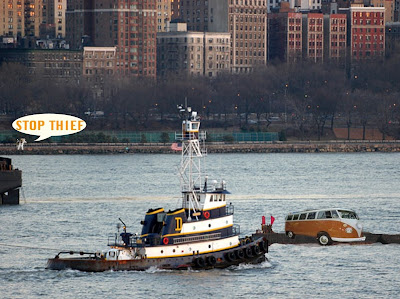 (Photo by Asta)
Things went from bad to worse as the next MFV (magic, flying, van) sighting came to us from Derby who spotted our van IN a river near is home! He thinks it might have been caught up in the flash floods brought on by recent storms in the area. 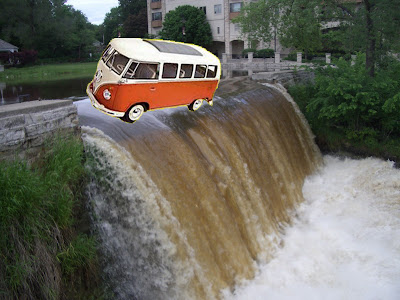 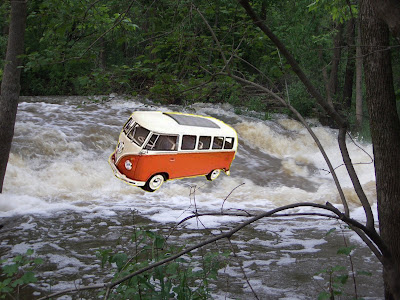 (Photos by Derby)
We have had so many van sighting come up, that we opened up a MFV Sighting hot-line. Sassy has volunteered to man the phones while we continue searching for our van. 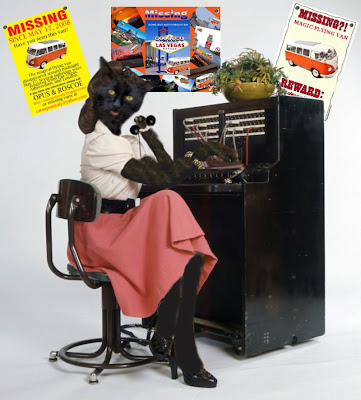 Here are what some of her callers had to report:

One caller reported seeing the magic flying van heading down historic route 66. Anyone from Illinois on west, keep your eyes peeled for our van. It may spring up again along some of Route 66's popular historic sights. 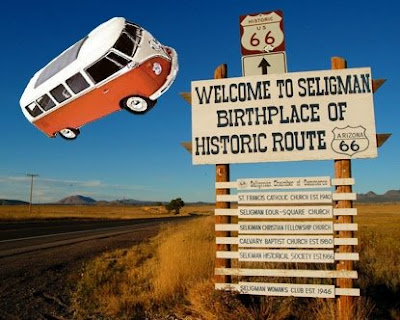 (Photo by Sassy)
Several reports have come in from Japan with callers spotting the flying van floating over Tokyo... 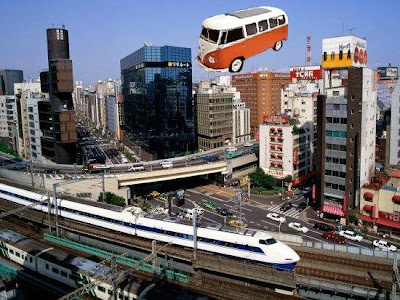 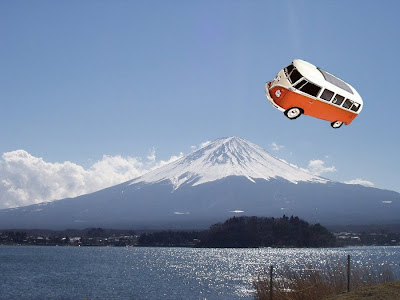 (Photo by Sassy)
...while a few frantic callers said that they saw the van as it barely escaped the deadly grasp of Godzilla. 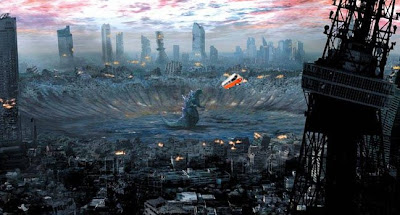 Keep your eyes wide open. Our van is still out there with those dirty thieves behind the wheel. Those tricky crooks even tinted our windows to make it more difficult to identify them. Write to us, from any where in the world, should you happen to see (or photograph) our missing van. 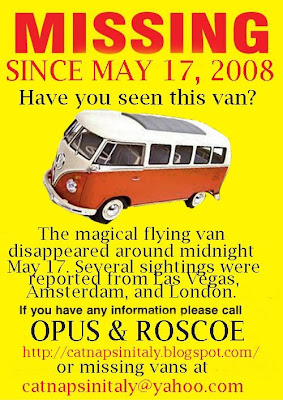 Whoever stole the van is really taking it for a "joyfly" (a flying joyride) around the world. Where will it turn up next?

Oh my word! They certainly are getting around! It's all a bit exciting really.

WOW! So many spotted the MFV, but everytime it's vanished when authorities arrive... We are glad Sassy helps you with the hot-line, she is the best cat for that job and hopefully communication goes faster!!

This afternoon we landed the Delta Flyer in the Netherlands. And tonight we going to watch footbal in the local bar! :-)

Yes, we scheduled the post a little later because of Stormie, but we are home now!!

I am taking a quick break from fielding the phone calls about the magical van. I cannot write fast enough with all of the incoming calls. The van has been seen in many places. I think the boys should get a map and pin point the sightings on the map. Maybe that way we can get a pattern on where we could look for it next??????? Got to run the phone is ringing again.
Whoever took the magical van should pay dearly for this great theft!!!!!!!!!

Maybe it is one of them cars/vans that could also be a boat! Plus yours flys! Super cool magical van.

I need more pencils because I keep using them up. The calls are coming in too fast and I write and write and write. Are you working on the map thingie???? Maybe this will give us a pattern on where the van will show up next.
Momo is coming tomorrow night!!!!!

That van is certainly getting around!

You two need to stop over the my post about the van. There have been several more sightings at different places than before.
Momo has arrived and we are catching up on the news from the blogging world.
xoxoxo,
Sassy & Momo

We just came home from our bike tour and looking at the photos now, we think we have spotted the van!!!

OMD...... so many reports about the van came in!!! We wonder if we can spot it in Toronto or over the Niagara Falls.