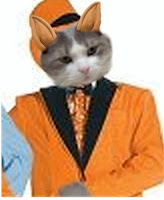 We have had some very exciting news. As many of you know our dear friends, Karl and Ruis, will tying the knot this month. We have been so excited and happy them. They are both sweet, kind, thoughtful (and handsome) cats who deserve each other. We had hoped that we would be invited to the wedding of the year, but they really surprised us. Not only have we been invited to the wedding, but we have been asked to be their best men! We are thrilled beyond words and so honored that they would chose us to stand by their sides on such an important day.

Roscoe has already dusted off his orange tuxedo and has been wearing his Spock ears in anticipation of the big day. I have a feeling the wedding will be a little more dignified than what Roscoe has in mind. I believe those Spock ears (and orange tuxedo) will have to "come up missing". If only I could get Ros to take them off for a moment!

In other news, our flying van is STILL missing. Though reports are coming in that is has been spotted in the Netherlands. Ruis sent us a photo of our beloved van in Amsterdam. 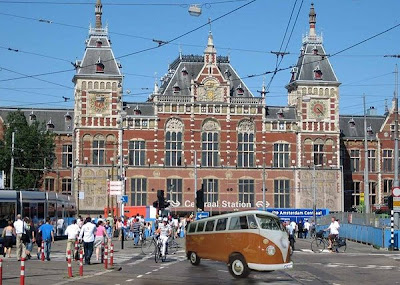 (photo by Ruis)
Unfortunately, by the time the local authorities arrived on the scene the van had disappeared! Pets around the world, keep your eyes out and let us know if you have spotted our precious van!

Roscoe looks very flashy in orange tuxedo. Karl and Ruis may have something else in mind.

I am honoured and ecstatic to be their flower and lizard kitty. What fun!

I am seriously concerned about the van. It must be found - how else can we have adventures together without it?

I have been sitting at the window all day and looking out for it. Since ours has become a dead end street there is conspicously fewer passing traffic. There has not been an orange car for days, either on the road on in the air.

We are coming to the wedding too! We are very exited, and honoured to get a personal invitation.

I think I might have seen your van in the UK. I'm not sure but I will keep looking.

Oh I hope you find the van in time for the wedding!

Congratulations on being Best Mancats in the wedding!

I will keep a close watch out for the van.

I just assumed the wedding party would be dressed in their best Star Trek regalia.

It is so exciting, isn't it?? You will both make great best mans!

Thanks for the kind words on my hurty paw, it is feeling much better!

You've cleaned up the van! That must have taken a long time after all of those parties - see you at the wedding.